If you haven’t noticed, I love my crockpot! There is nothing quite like it. Throw in some meat and a bunch of herbs, put it on low and 6-8 hours later you have a very yummy meal that you had to do nothing with for hours!

The other day I had a hankering for some Indian food, so I thought that I would try out a version of chicken tikka masala, making it paleo and enjoying it after it had cooked all day while I worked. I must say – it was delicious! This amount can feed 6-8 people, or 2 people and give us leftovers for days. : )

Ingredients (feeds 6-8; half it if you want less):

Get your crockpot out and add in the 2 onions and 4 garlic cloves. Then add in the crusted tomatoes, tomato paste and spices (everything above the coconut milk on the list above). Top it off with your chicken thighs, season with more salt and pepper and put your lid on. You can cook it on low for 6-8 hours or on high for 3-4.

When you have about a half hour left, grab your cauliflower and chop it up into small pieces. Add the EVOO (two turns) to your large, deep skillet over medium heat. Add in the diced onion, cook down till translucent, then add in the cauliflower. Stir often, season with salt and pepper.  Cook for about 20 minutes on low heat. Now, I like to add in a squeeze of lime and some cilantro along with the onions in the last 5 minutes of cooking, but you don’t need to if you don’t want to. Totally optional.

In the last 5 minutes, get the chicken out with a bunch of the sauce in a bowl and shred it up. Turn the can of coconut milk upside down and open it up that way. This will put all of the liquid at the top which you can pour out. Now you are staring at the hardened coconut milk. Scoop this out into a deep pot (I used my oval dutch oven) and turn that on to low heat. Add in your chicken mixture and stir well. 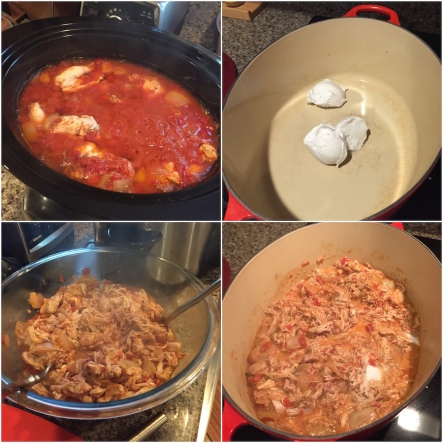 Now you are ready to assemble. Put in the cauliflower at the base of your bowl, top with the chicken tikka masala and garnish with some fresh cilantro. Enjoy!!

What we write about