So, the U.S. may be coming to an end here in a few short months (say both sides of the aisle over their perspective own candidate and also the opposing). I think you have a few viable options for this month of March Madness. You can stock up on cans of soup and dry goods preparing for the inevitable invasion of Putin and the USSR or Crazy Kim and the North Koreans (solid option, no shame in it). You could update your passport and work on getting a Visa to move to Canada (although I hear they are building a wall already though, sorry). You could pretend like none of this is happening, go out and buy a ton of stock in Blockbuster Video because its bound to get real big again and sit down to a huge meal of pizza, wings and ice cream, because those things are always good for you.

You could say this is March Madness in its fullest, so I’m going to set a goal and rock out March for me rather than for anyone else and let the craziness of the world spin away. I love that term March Madness. I love the NCAA brackets and the fact that Izzo and my Spartans are going to OWN IT this month! I actually am 100% flabbergasted by everything that is happening politically which is contributing to the MADNESS of March as well. But the biggest reason why I love March Madness is because this is when I tend to make my goals. I’m not one to do this in January, because let’s face it, there are WAY too many people at the gym in January and way too many diet fads out and about.

No, in March is when I set my goal because spring is almost here, shorts, tank tops, swimsuits, etc. are right around the corner. So, I have a goal for this month. Particularly because there are going to be some awesome pictures being taken in April when I celebrate 12 years of marriage to my awesome hubs. I’m already 1 lb down for my goal and know that I can take away the other 8 before mid-April as long as I work-out hard and continue to eat what is GOOD for me and not what got me the extra 10 in the first place.

So that’s my goal – 9 lbs before mid-April. I’m putting it out there. What’s yours? Here’s to an awesome March Madness – we can do this. Oh, and in case you thought this MA resident wasn’t still a true mitt lover – I sport this look most days. 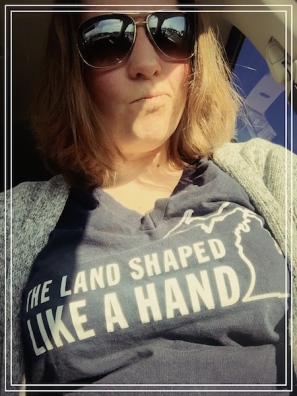 One thought on “Ready for Some March Madness”

What we write about